After 2001, a space odyssey, the second best movie ever could be Monty Python, the holy grail: 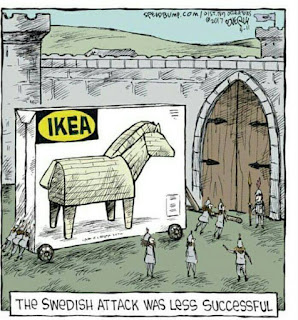 A Pink Floyd odyssey: Jupiter and beyond the infinite

Posted by Laurent DUVAL at 10:45 AM No comments: Links to this post


PhD manuscript and slides for her thesis:

are finally online (check the EURASIP Library of Ph.D. Theses). The work was ruled by the concept of BRANE power; a methodology for gene regulatory network inference and clustering based on graph optimization and biological priors. BRANE stands for Biologically Related Apriori Network Enhancement. It rhymes with cell membrane (and brain, for who it's worth).

Another rule is termed HOGMep, with HOGMep: variational Bayes and higher-order graphical models applied to Joint Image Recovery and Segmentation.

More links:
By the way, brain (and evolution) is celebrated in the 44th France Culture jingles compilation, Kultur Pop.

Posted by Laurent DUVAL at 12:28 PM No comments: Links to this post


"We are using your brain's electrical system as a receiver,We are unable to transmit to your conscious neural interference" 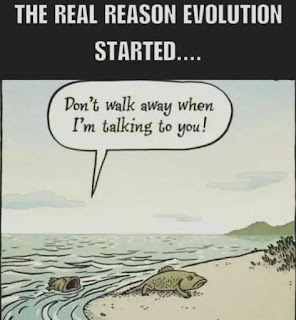 There is no hope, there's only chaos and evolution (Evereve, Fade to grey, Visage cover)

The HexaShrink methodology described above is detailed in the recently published paper:

With huge data acquisition progresses realized in the past decades and acquisition systems now able to produce high resolution point clouds, the digitization of physical terrains becomes increasingly more precise. Such extreme quantities of generated and modeled data greatly impact computational performances on many levels: storage media, memory requirements, transfer capability, and finally simulation interactivity, necessary to exploit this instance of big data. Efficient representations and storage are thus becoming "enabling technologies" in simulation science. We propose HexaShrink, an original decomposition scheme for structured hexahedral volume meshes. The latter are used for instance in biomedical engineering, materials science, or geosciences. HexaShrink provides a comprehensive framework allowing efficient mesh visualization and storage. Its exactly reversible multiresolution decomposition yields a hierarchy of meshes of increasing levels of details, in terms of either geometry, continuous or categorical properties of cells. Starting with an overview of volume meshes compression techniques, our contribution blends coherently different multiresolution wavelet schemes. It results in a global framework preserving discontinuities (faults) across scales, implemented as a fully reversible upscaling. Experimental results are provided on meshes of varying complexity. They emphasize the consistency of the proposed representation, in terms of visualization, attribute downsampling and distribution at different resolutions. Finally, HexaShrink yields gains in storage space when combined to lossless compression techniques.

And there is a patent associated to HexaShrink, Method of exploitation of hydrocarbons of an underground formation by means of optimized scaling:


Posted by Laurent DUVAL at 6:11 AM No comments: Links to this post

An PhD position is still available on Graph-based learning from integrated multi-omics and multi-species data (genomic, transcriptomic, epigenetic) between IFP Energies nouvelles and CentraleSupélec/INRIA Saclay. All the information is gathered at this address.

Some information is duplicated below:

Micro-organisms are studied here for their application to bio-based chemistry from renewable sources. Such organisms are driven by their genome expression, with very diverse mechanisms acting at various biological scales, sensitive to external conditions (nutrients, environment). The irruption of novel high-throughput experimental technologies provides complementary omics data and, therefore, a better capability for understanding for the studied biological systems. Innovative analysis methods are required for such highly integrated data. Their handling increasingly require advanced bioinformatics, data science and optimization tools to provide insights into the multi-level regulation mechanisms (Editorial: Multi-omic data integration). The main objective of this subject is to offer an improved understanding of the different regulation levels in the cell (from model organisms to Trichoderma reesei strains). The underlying prediction task requires the normalization and the integration of heterogeneous biological data (genomic, transcriptomic and epigenetic) from different microorganisms. The path chosen is that of graph modelling and network optimization techniques, allowing the combination of different natures of data, with the incorporation of biological a priori (in the line of BRANE Cut and BRANE Clust algorithms). Learning models relating genomic and transcriptomic data to epigenomic traits could be associated to network inference, source separation and clustering techniques to achieve this aim. The methodology would inherit from a wealth of techniques developed over graphs for scattered data, social networks. Attention will also be paid to novel evaluation metrics, as their standardization remains a crucial stake in bioinformatics. A preliminary internship position (summer/fall 2018) is suggested before engaging the PhD program. Information at: http://www.laurent-duval.eu/lcd-2018-intern-phd-epigenetics-omics-graph-processing.html

Posted by Laurent DUVAL at 3:10 PM No comments: Links to this post

I am sorry David, I am afraid I should do that :) This thought gathering stems from a talk with David in Budapest, Hungary, from Shakespeare's Helmet Collective. He stands in the eye of a political storm (recent hungarian elections and Viktor Orban declarations), and proposed (with a collective) a Trauma Memorial in the center of Heroes' Square (Hosök tere) in Budapest. I was lucky enough to witness it directly. It appeared as a black monolith with a video stripe: 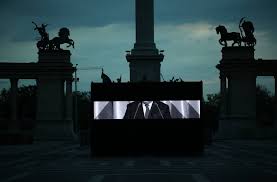 Here is a full story, which wavelets and monoliths, boozers and Marker. But you can skip it directly to the video: A millenniumi emlékmu kiegészítése 100 év hordalékával. As a side note, I was happy to be for the first time in Hungary, home of many Hungary scientists mostly mathematicians (some known as the Martians), some being prominent in the history of wavelets, like Alfréd Haar or Frigyes Riesz, who were put in a multiscale perspective in a 2D wavelet panorama review paper, details below: 
A guy in a small drunkard bar builds a choreography with the local boozers, making them reproduce the planets and satellites' motions of the solar system. In black and white.

The movie was stunning, with shades, a whale and rising violence. I could not help but relating it to Stanley Kubrick's 2001: A space Odyssey (as we are celebrating its 50th anniversary) and to Ian Watson's The embedding (foreign languages and the whale). We ended this cinema show with the 1962 dystopian black-and-white short movie La jetée (The Jetty), by Chris Marker, aka Christian Bouche-Villeneuve, which was the inspiration for Terry Gilliam's Twelve monkeys army. A story about global war, time-travel, memories, love and death. It can be viewed at Vimeo: La jetée.

Then, I was in Budapest in April 2018, for a too short week-end. As I am an obsessed 2001 fan, reminiscences from 2001 were evident everywhere, either in Budapest's magnificent parliament, the Vasarely museum or the mere streets of Budapest.

So I went to Hosök tere, a beautiful square with monuments celebrating the Magyar historical background. And right in the center of the square, an installation displayed an intriguing video and sound on one side of a black cube:

This marked a Hungarian syzygy, a connection of seemingly unrelated events. The video displayed the upper half of a dark suit, uttering speeches I could not understand. Of course, Hungarian is known as a special language, in the Uralic-Finno-Ugric family. Funnily, the subtitles were in esoteric ASCII characters. But after a few seconds, it became clear that the sounds were reversed, spoken backwards. Apart from causality issues, I should confess that backwards or forwards, Hungarian remains foreign to me. So hopping inside the cube, one could be welcome by its "kind wards".
This picture summarizes a state of affairs: a rising tide of nationalism, autocratic power, growing on sedimented ancient trauma and more recent angers and fears (as far as I can understand). The above "Our insatiable stomach" is a timely snapshot with those close sounding of Hungary and Hungry sounds. So here is it, an mere addendum to this black blocky sedimentation of history, cast reverse:  A millenniumi emlékmu kiegészítése 100 év hordalékával. With fun: this  Shakespeare's Helmet Collective work is curated by... Byron (for those who have an eye for finest details)

Posted by Laurent DUVAL at 12:04 PM No comments: Links to this post 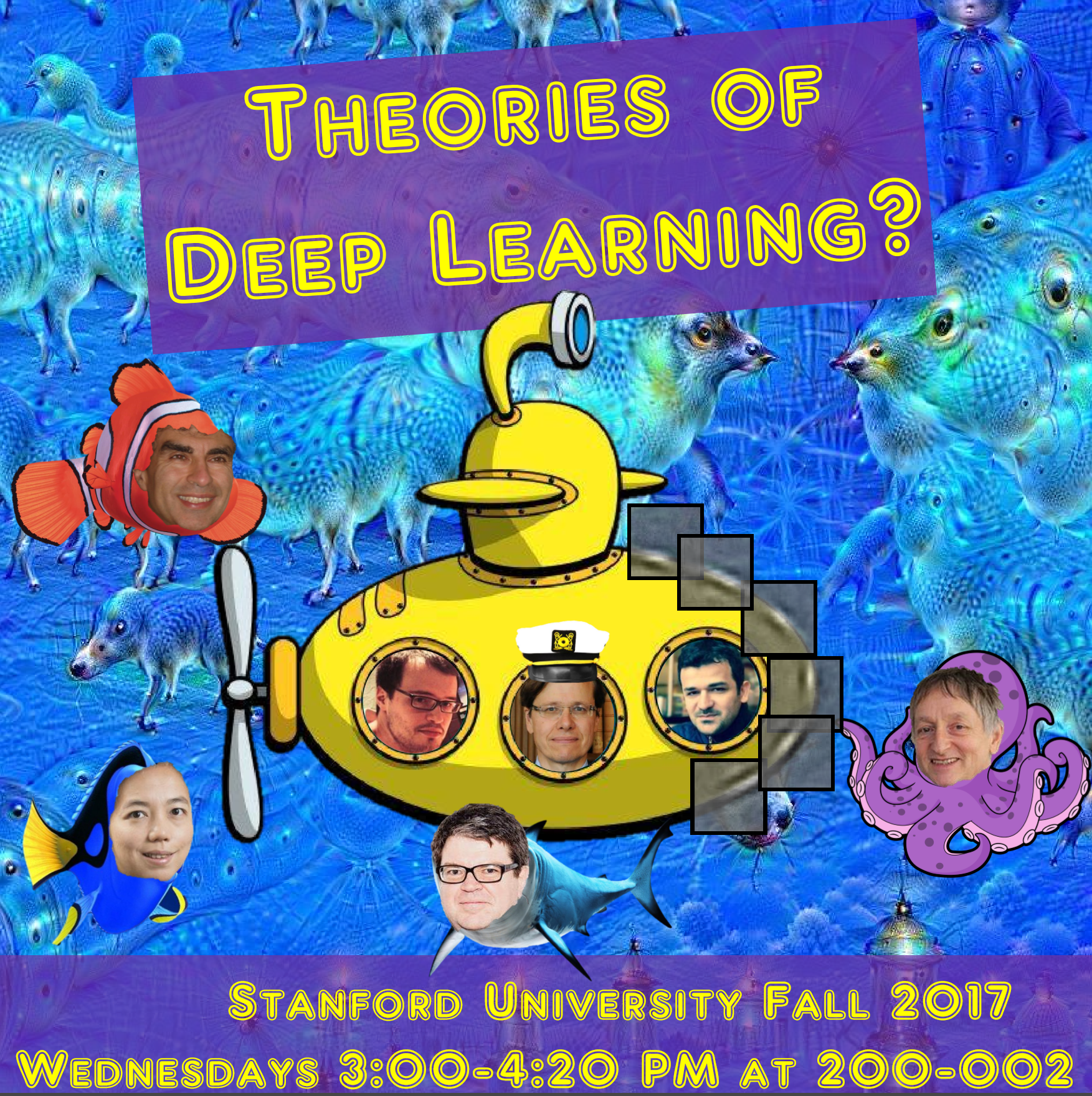 With a little sense of provocations carried by the poster, Stanford university STATS 385 (Fall 2017) proposes a series of talks on the Theories of Deep Learning, with deep learning videos, lecture slides, and a  cheat sheet (stuff that everyone needs to know).  Outside the yellow submarine, Nemo-like sea creatures depict Fei-Fei Li, Yoshua Bengio, Geoffrey Hinton, Yann LeCun on a Deep dream background. So, wrapping up stuff about CNN (convolutional neural networks):

The spectacular recent successes of deep learning are purely empirical. Nevertheless intellectuals always try to explain important developments theoretically. In this literature course we will review recent work of Bruna and Mallat, Mhaskar and Poggio, Papyan and Elad, Bolcskei and co-authors, Baraniuk and co-authors, and others, seeking to build theoretical frameworks deriving deep networks as consequences. After initial background lectures, we will have some of the authors presenting lectures on specific papers. This course meets once weekly.

Videos and slides are gathered at follows.

Posted by Laurent DUVAL at 12:06 PM No comments: Links to this post